The Toro bodegas are scattered in and around the town of Toro. There is not an abundant amount of lodging in Toro, so many wine country travelers elect to stay in Zamora. There is a Marriott in Zamora as well as a Parador. We are big fans of Spain’s Paradoras. These are government-run hotels equipped with many amenities, including a restaurant. If you are a senior, there are discounts available. The Paradors are famous buildings that have been restored by the Spanish government to encourage tourists. 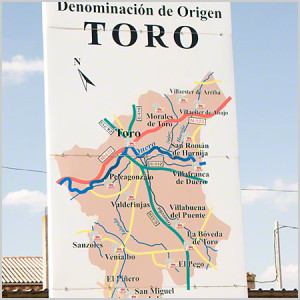 Toro is located in the province of Zamora in the region of Castilla y Leon. Toro is one of five designated wine regions of Castilla y Leon. Toro wines are, in some respects, under the radar and perhaps the least well known in the political province of Castilla y Leon. The Ribera del Duero is the most famous D.O. of the area and Toro lives in its shadow. Only in recent times did Toro become a D.O. and that was in 1987. In planning our trip to Toro I was amazed at the dearth of information on the Tora wine region. My “go to” resource was a book by Brian Murdock, “Spanish Wine, A Pocket Guide.” In today’s world of Internet resources the Toro wine region remains somewhat of an enigma. Information resources are few and far between.

When we visited the Toro region we enjoyed the wines immensely and since then we have been searching for them in our local wine shops. There seems to be few available but the ones that are on the shelves are delicious and very reasonably priced. We think the Toro red wines are more robust than the Tempranillo wines of Ribera del Duero or Rioja.

The most important Toro wine facts

The Toro wine region is growing rapidly in the number of new wineries. 15 years ago there were 10 Toro wineries and today there are some 60 wineries.