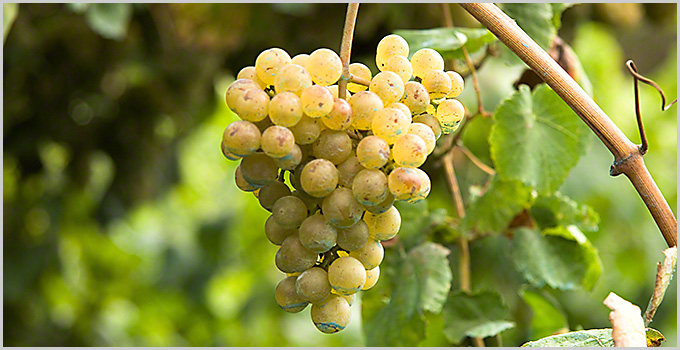 One of the most interesting characteristics about the Albarino grape is the way it is grown. The vines are trained on a trellis system so that they are high off the ground. The area is on the Atlantic coast, which makes for a soggy and wet climate. This trellis system protects the grapes from rot.

Albariño is a wonderful, refreshing wine that pairs well with seafood. It is a wine with very clear characteristics. We find the wine very similar in style to a dry Riesling.  It has characteristics of lemon and lime, along with balanced acidity. Some think it has a subtle effervescence.

When visiting the northern area of Spain, asking for a glass of Albariño will make you look like a local. Order a snack of pulpo (octopus) or Padrone peppers. Sit out in the sun people watching. Sip and swirl your glass of Albariño and enjoy life at its best.

This photo shows the common trellis system used in Albariño vineyards. Because the area of Rias Baixas is on the coast, fog and moisture are daily occurrences. The trellis system allows the grapes to dry from the ocean breezes. None of the Albariño grapes touch the ground.