The D.O. Cariñena is little known to most in the world of Spanish wines. There are only 29 wineries in the Cariñena wine region, and only a handful of the wines are exported to the United States. The closest we have been to the Cariñena wine region in Spain was on a train ride from Logrono, in the Rioja region, to Barcelona. We passed through the city of Zaragosa. Although Zaragosa is not in the region of Cariñena, it is very close by and in the same autonomous area of Aragon. Until this past week, we had not tasted a single wine from this region.

The wines of the region are mostly red with Garnacha and Cariñena (Carignane) being the most predominant. In 2012 the Cariñena wine region launched an awareness campaign to showcase the wines from this region. Part of that campaign was a seminar and tasting held at the Piperade restaurant in San Francisco on Thursday, May 15, 2014. We attended as part of the media and trade. We tasted six wines, with Master Sommelier Andrea Robinson leading the discussion. The seminar was followed by a walk-around tasting of additional Cariñena wines. Those we enjoyed with delicious Tapas dishes prepared by the chef at Piperade.

About the D.O.P Cariñena wine region 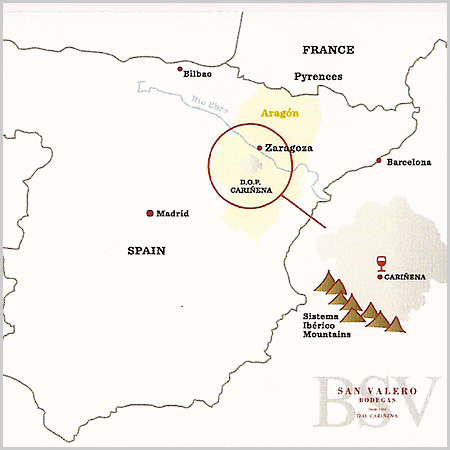 The Cariñena wine region was named an official Denominacion de Origen in 1932. In 2011 Cariñena was declared a “Protected” area. Protected designation is an extra layer of control over what grapes are grown and how the wine is made. The region survived the Phylloxera blight that devastated most of Europe’s vineyards in the 1860’s. The reason, the mite that causes this vine disease could not survive in the stone soil of this region. This soil is unique to this wine growing area and the Cariñena wineries have adopted the mantra “Crafted in Stone.” The terroir of the region is also influenced by the Ebro River and Valley. The vineyards are located from 1300 to 2600 feet in elevation. There are very large differences between day and nighttime temperatures. Add in the Cierzo winds, and you have the total factors that give the Cariñena wines their character. http://en.wikipedia.org/wiki/Cierzo. In the Cariñena wine region, there 1600 growers and 35,000 acres of vines. Many of the small growers belong to cooperative wineries. One of the largest and most notable is Bodegas San Valero, managing 700 growers.

About the Cariñena Wines 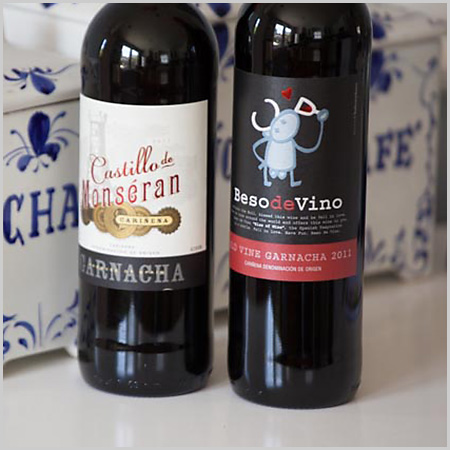 These two are at KL Wines

Most of the wines we tasted were young wines. The wines displayed fresh fruit, accompanied by balanced acidity and just a touch of tannins. One of our favorite wines was Castillo de Monséran Garnacha 2013, a wine produced by Bodegas San Valero. This is a delightful and fun wine and, amazingly, only $8. The K&L Wine shop carries this wine, and it makes a perfect red for an outdoor event. Another favorite was the Old Vine version of this wine, but with a vintage of 2009. Sweet but gentle oak marked this wine, along with deep dark fruit flavors. The winery rep told me this wine is available in the U.S. at Cost Plus stores. At an SRP of $15 it is great deal, and I bet Cost Plus will sell it for less. We were also impressed with the Beso de Vino wines, Old Vine Garnacha 2011 and Selección 2011. Both received 90 points from Steve Tanzer. I like them both and found the Old Vine Garnacha also at K&L Wines for a measly $8.99